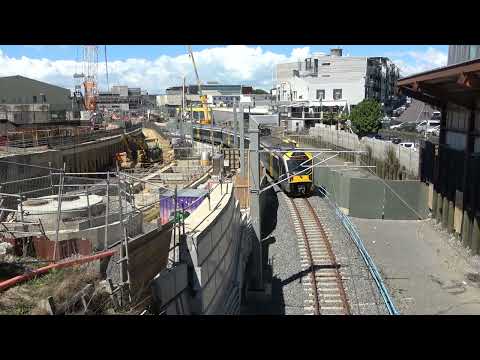 A quick update on City Rail Link construction progress at Mt Eden. The new Down Main now sits in part of the trench for access to the tunnel, with the ground around it being dug out for the other new tracks. The Western Line remains open during construction, and services passing through are seen here 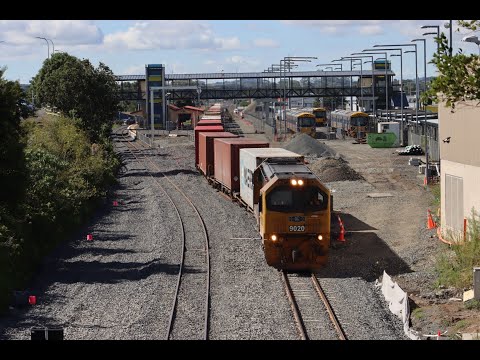 While Pukekohe station is in the middle of redevelopment, a temporary track layout has appeared at the northern end of the station, before new platforms are installed. Here, we see Te Huia, train 101, head south towards Hamilton, then DL 9020 leading train MP4 over the temporary "kink" on the Up Main 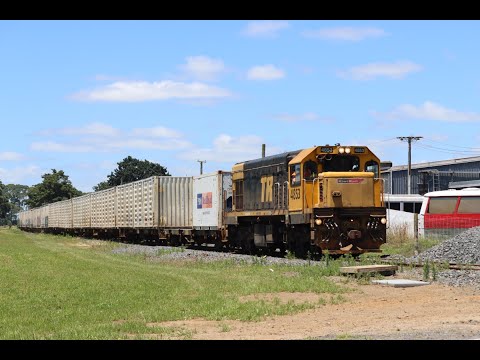 We head to the Waikato Region shortly after the border south of Auckland opened to everyone. Here, we caught up with train MP6M at Huntly, the Hautapu shunt with DC 4853 in charge, and trains 229 and MP8 at Rotokauri 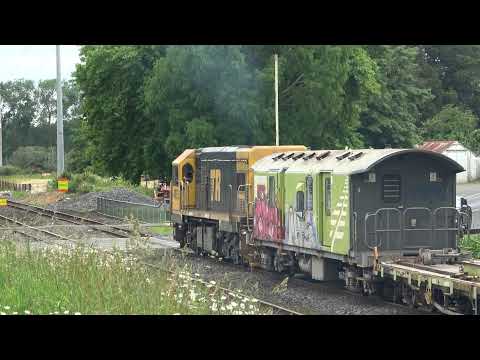 A few rail scenes from the Franklin area, mostly around Pukekohe. Features the relocation of DC 4191 from Wellington to Auckland for shipment to South Africa, DC 4853 leading a work train wrong line and a test run for Te Huia 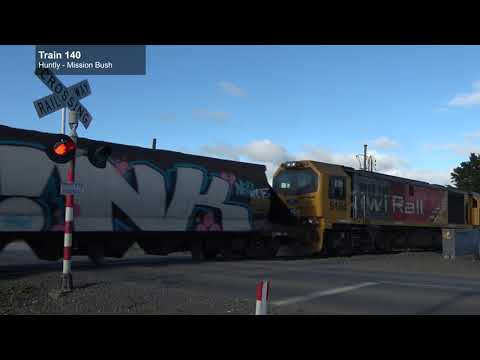 Various trains around the Pukekohe area during the course of Alert Level 3, including train B23 with a rake of empty wagons and the delivery of DC 4536 to Glenbrook 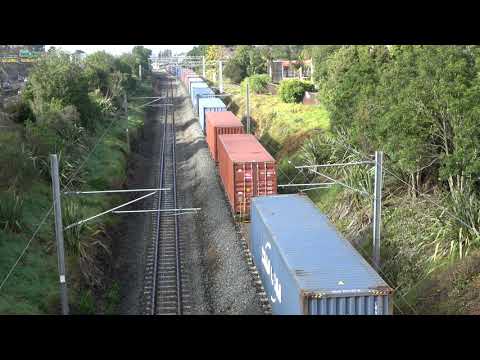 The port shunt, led by DL 9319 and DL 9164, running ahead of Te Huia making its first public run to The Strand station in Auckland. Both trains were running via Newmarket due to track work on the North Island Main Trunk via Panmure. DFB 7295 was in charge of train 104 for its inaugural downtown Auckland run, with DFB 7077 on the other end to run the train back to Westfield and also for train 105 in the evening 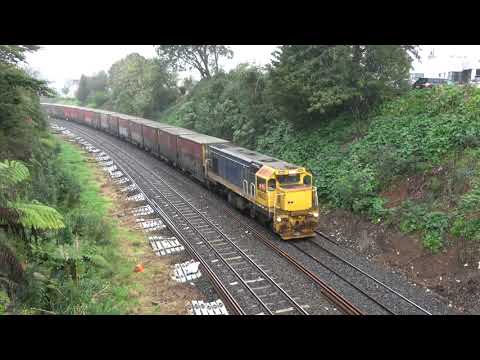 A rare sight these days, DCP 4663 leads train 228 solo through Pukekohe on 25 June 2021. The DC class is slowly disappearing from the New Zealand rail network, although a handful are still in service and are usually seen on shunt services 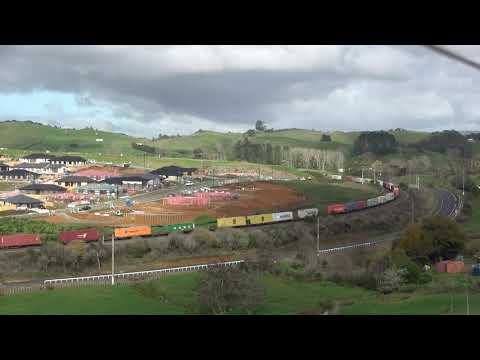 Passing through new housing development, DL 9204 climbs from Pokeno with train MP6 in tow. Further up the line at Papakura, the train would be halted by tornado damage at Wiri 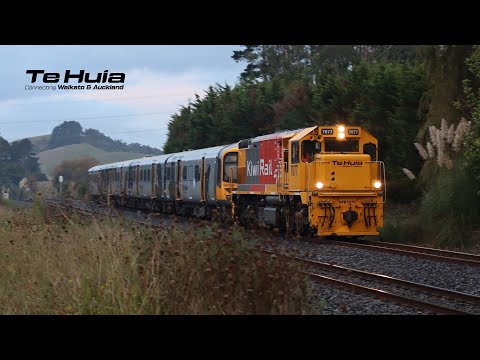 On 6 April 2021, the Hamilton to Papakura commuter train, Te Huia, entered service for the first time. The service marks a return of commuter trains to the route after an absense of almost 20 years. DFB 7077 hauled the inaugural service from Frankton station in Hamilton to Papakura, followed by DFB 7295 on the second service. We follow the train in both directions, and go along for a ride on the refurbished carriages 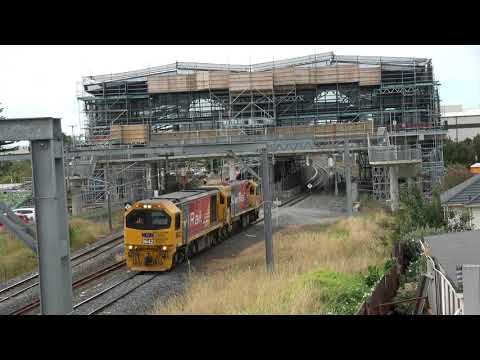 An update to the Puhinui station interchange construction, with the superstructure of the new station building largely in place. Passing by during the work day are DL 9089 on train MP5, running opposing main, and DL 9642 and DC 4594 heading back from Wiri to Westfield light locomotive 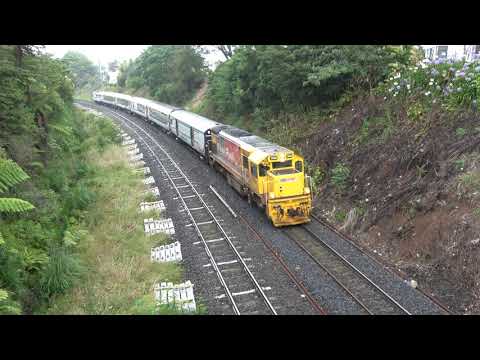 Just before the rain appears, DL 9538 leads train MP2S out of Pukekohe as ADL 810 arrives. Following soon after is Wairarapa escapee DFB 7010 with train 200 as the rain comes down, then heading south is DL 9106 with train MP9. Although the Northern Explorer is running, train 200 is terminating at Otahuhu as the Eastern Line is using The Strand while Britomart is closed. Train 201 however, continues departing from The Strand. With maintenance day in the Waikato now on Sundays, train MP2S is scheduled to depart at the same time as the rest of the week, but now sits in Hamilton for around 10 hours before heading for Auckland, hence the train running just ahead of the Northern Explorer 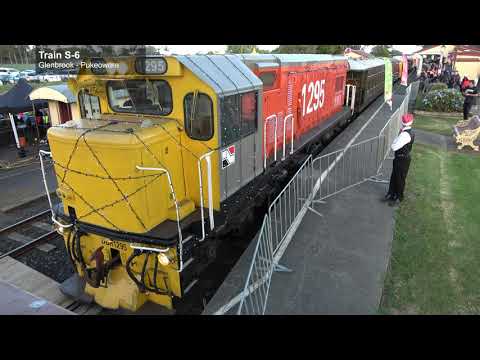 Christmas lights return to the Glenbrook Vintage Railway for another year, with the station and train decorated in lights for the festive season. DBR 1295 and Ww 480 provided the power for the evenings, usually with an 8-car train 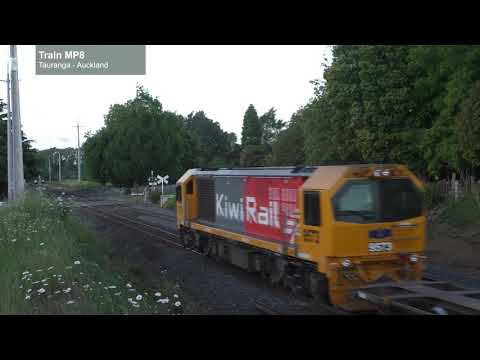 A rare sight in Auckland, DXC 5293 returns to Wellington dead on train 221 behind DL 9360 and DL 9187, seen here passing through Buckland. DXC 5293 had earlier led train 220 into Auckland, presumably after a traction motor change in Wellington. Heading the other way, DL 9573 leads train MP8 up the hill 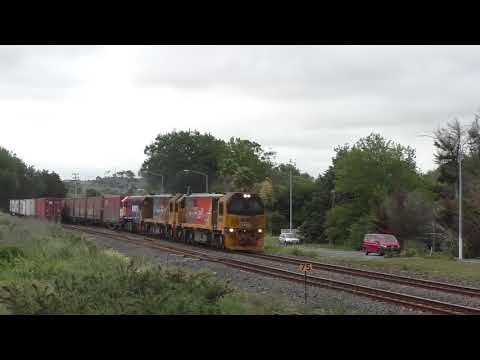 The third locomotive to be sent north for export to Australia, DC 4692, headed north on train 220 behind DL 9469 and DL 9210, on its last run on New Zealand rails. Train 220 as well as train MP5 heading the other way are seen here through Paerata, where regional speed restrictions are still in force 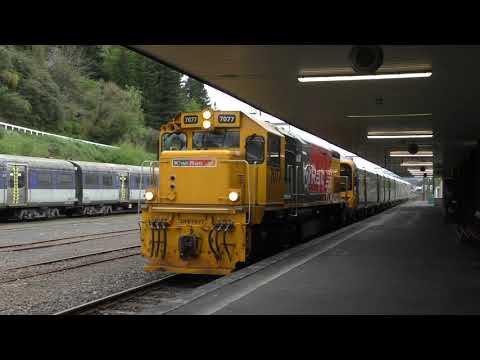 The second carriage set for the Te Huia service arrived in Hamilton from Wellington behind DFB 7077 on 10 October 2020. Here we see the delivery run between Raurimu and Hamilton. One more set is due to come up, with a late decision made to refurbish one more carriage to provide a complete spare set 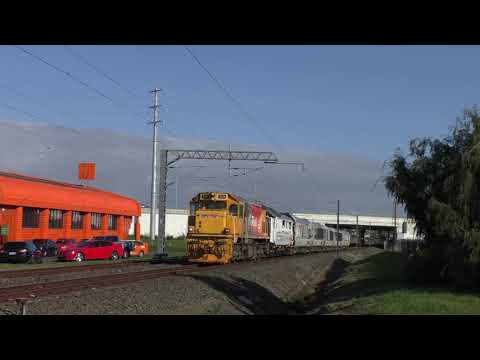 After an absence of over six months, the Northern Explorer returned to the rails the day after Auckland's return to Alert Level 1, on 8 October 2020. The train is seen here, with DFB 7173 in change, passing through Takaanini, and northbound as an empty service through Papakura the previous day. The Northern Explorer had been planned to return earlier, however Auckland's second lockdown delayed the relaunch 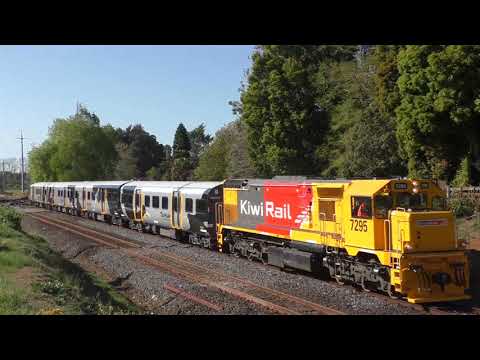 The first Te Huia set went on its first training run in October 2020, with DFB 7295 making a run from Hamilton to Otahuhu and return. The return trip is seen here passing through Buckland, with DFB 7295 on the usual end of the consist. As a bonus, archive footage of the driving car, SD 5893 (now SRV 5893) is included, with DC 4375 propelling the set out of Papakura towards Britomart 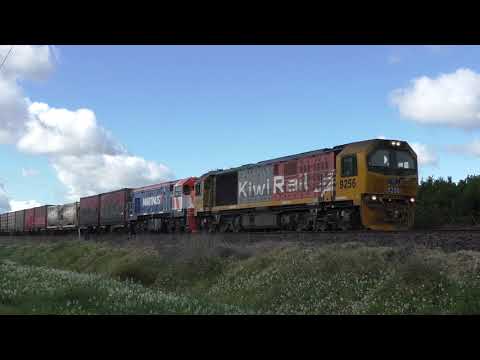 On its last run on New Zealand rails, DC 4444 hitches a ride on train 220 behind DL 9256, seen here passing through Pukekohe and Papakura. Trains MP5 and 138 (right behind 220) also make an appearance 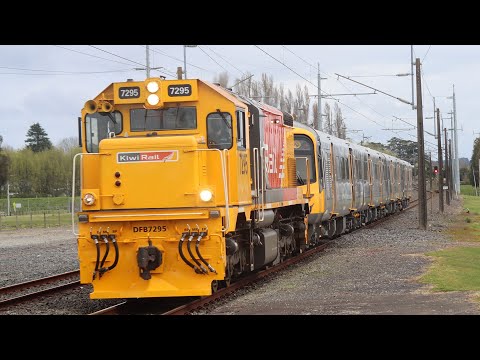 The first carriage set for the new Te Huia service between Hamilton and Auckland was delivered on 5 September 2020, with DFB 7295 leading the empty service. The train, running as B04, is seen here through Otorohanga on the last leg of its journey to Hamilton 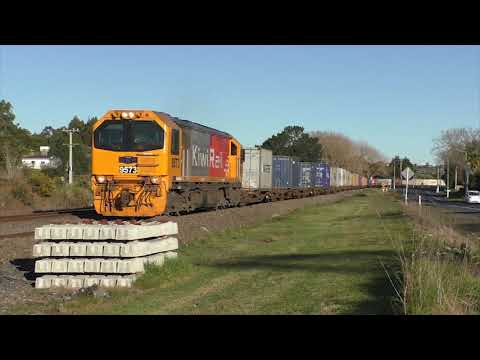 Trains through Paerata on the first weekend of Auckland's second round of Alert Level 3. This is also the last weekend before all trains through Auckland are limited to 40km/h because of poor track condition and urgent rail replacements. Here, we see ADLs 802 and 808 on full-speed shuttle services, and DL 9573 on train MP6, one of the few trains that runs during all alert levels 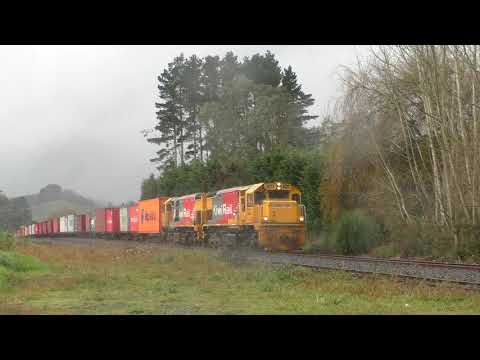 On a great day for Auckland's water supply, DFB 7322 and DFB 7023 crest the Whangarata Bank with a heavy train MP4 in tow. The metroport services are usually the domain of the DL class, though a number of DFB pairs have been running some services over the last few days 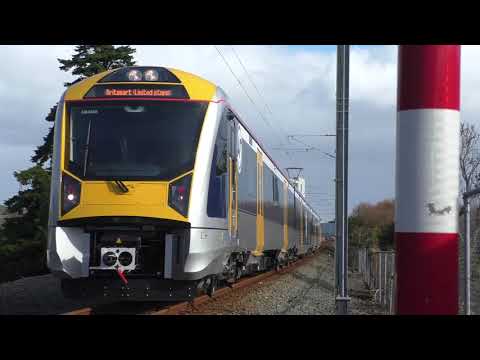 Two of the second batch of 15 AM class EMUs entered service during the last week. AM 810 and AM 836 have been running exclusively on the Onehunga Line since introduction, and are seen here running weekend services on the branch 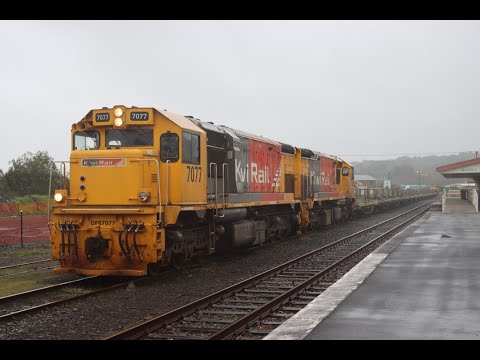 As part of the North Auckland Line upgrade project, covering Swanson to Whangarei, a number of work trains have been operating over weekends from Westfield to a number of locations. Here, we see one such train, which spent the weekend offloading sleepers before returning to Westfield empty. DFB 7077 and DFB 7049 provided the power for this weekend's train, with only DFB 7077 in power on the trip home. As a bonus, DL 9072 and DCP 4790 are seen descending into Ellerslie with the port shunt, running via Newmarket instead of the usual route via Panmure due to track work on the North Island Main Trunk 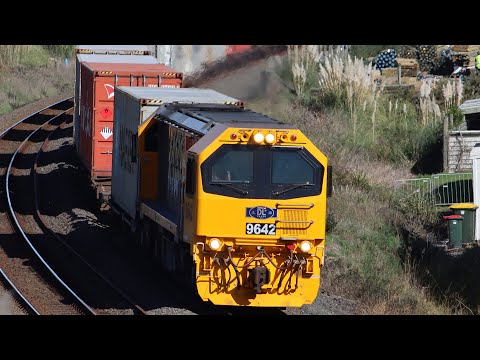 After 7 weeks of COVID-19 lockdown, New Zealand was finally free to roam around again, including for railfanning. Here we see some freight trains during the first weekend of Alert Level 2

All photos and videos on this site are licensed under a Creative Commons Attribution-NonCommercial-NoDerivatives 4.0 International License.
Attribution to https://nzrailphotos.co.nz is required. If you wish to use photos for commercial use or for an exception to this licence, please seek permission first. Fees may apply.
123...21